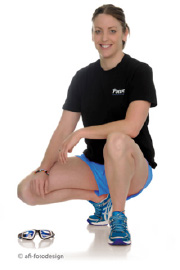 I, Sarah Poewe, am honored to be chosen as the German Swimming Patron for the European Maccabi Games. During the 20 years of my swimming career, I have followed the Maccabi Games with great interest. Prominent swimming athletes, such as Mark Spitz, Lenny Krayzelburg and Jason Lezak initially brought the Games to my attention.

In the past I had been invited to take part at the Games, but unfortunately due to my studies and training schedules I was unable to partake. Now that I have retired from professional swimming and have set up my own Personal Swim Coaching business (Poewe SwimCoaching), I have time to invest and promote my role as an Ambassador for the European Maccabi Games.
European Maccabi Games, taking place in Berlin for the first time on German soil, makes me excited and very emotional. Knowing the historical background of Berlin highlights this event.

I am so very much looking forward to supporting and working with the German Maccabi Team. Thank you once again for awarding me this honour.

Sarah Poewe (*1983) is an Olympic breaststroke swimmer. The swimmer, who has both the South African and German citizenship, is 17-time German women’s champion and holds 3 European records as well as 9 German records. In addition to multiple international titles and medals, Sarah Poewe won the bronze medal in the 4x100m medley at the Olympic Games 2004. Poewe is the first Jew to win an Olympic medal for Germany after 1936.